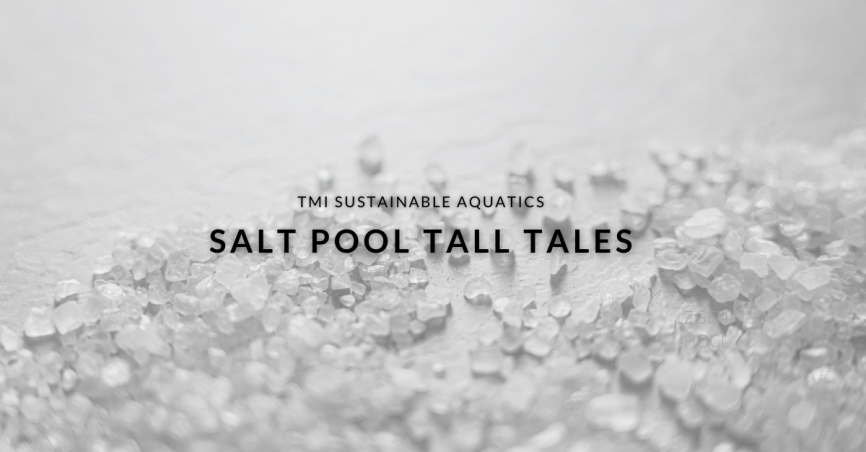 Having been in this business for over 25 years I have heard some “interesting” stories about salt pools; here are a few that have stood out over the years:

I think the best one was a call I got from the owner of a swim school that had a pool built and the equipment was started up for the first time. I received the following call

“Timothy, this is Craig. The pool builder has just started the equipment up and we are getting a lot of corrosion, when I asked the builder why it was happening, he told me it was the salt system causing the corrosion”

“Craig” I asked him “Where is the salt?”

Of course, being a newly plastered pool, they hadn’t added the salt yet.

I have actually seen a high-end Health Club advertise on their web site that they use salt to purify their water and it is “chlorine free”; I felt compelled to contact the GM and explain that not only is that untrue, but if his local Dept. of Health believed he had a “chlorine free” pool that would be a problem.

I was contacted by a well know university on the east coast because they had been told that the reason for the starter blocks and scoreboard corroding was due to the salt. When I asked for her to get an explanation on how the salt is getting to the blocks and board, the answer the pool guy gave her was “it evaporates. As explained below, salt does not evaporate.

An Aquatic engineer once told me that he was against using salt because he was getting a residue of salt on the pool room walls; when I explained that it was not possible because the way that salt is extracted from water is by a process of evaporation.  When landing at San Francisco the large Cargill outdoor ponds are easily visible, they are filled with seawater and over a period of time the water is evaporated by the sun and the salt stays behind!

Another one I remember was talking to the owner of a very large athletic club chain about his concern about using a salt system due to the increased buoyancy of the water due to the salt. So, I filled 3 glasses up with water and used a small amount of salt, 1,000 PPM in the first, 3,000 PPM in the second and 5,000 PPM in the third. I then place an egg in each and, after letting them settle for 30 minutes, took a photograph of each. As you might guess there was no difference in the level that the egg was floating in, proving that, at these low levels of salinity, the buoyancy is not affected. The club chain uses salt in their pools now.

My last recollection was a swim school instructor telling me that the hair had begun to grow back on his arms since they converted to a salt system.