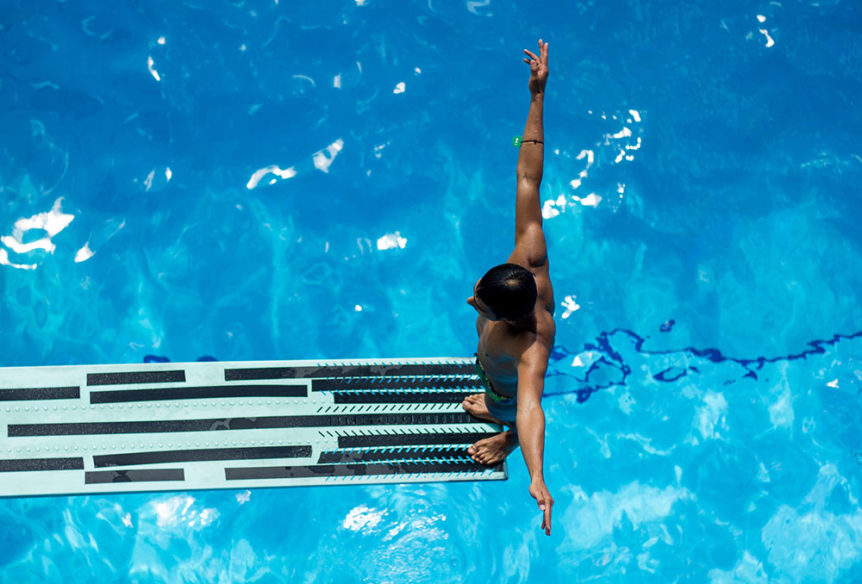 In simple terms, a swimming pool acts like a big battery. A typical battery consists of an anode a cathode and an electrolyte which allows current to flow between the two.   In a swimming pool, you have dissimilar metals such as stainless steel railings, copper, brass and titanium nickel plating in heaters in an electrolytic solution (Pool Water) the dissimilar metals acting as anodes and cathodes.

When you have two different metals submerged or contacting the water they can have a potential difference between them, the less noble metal (weaker and more active) of the two would be the anode.  Current passing through the pool water to the nobler (stronger, least active) metal the cathode. The process of this electric current passing between the two results in a faster rate of corrosion of the weaker metal (the anode)  is called galvanic corrosion.

Here is the definition of galvanic corrosion straight out of the dictionary (also called bimetallic corrosion) “a electrochemical process in which one metal corrodes preferentially when it’s in electrical contact with another in the presence of a electrolyte”.

I have had some people tell me that only saltwater pools need a sacrificial anode and I end up explaining to them that theoretically almost all pools are saltwater pools as all chlorine is made from salt, so whether you’re adding chlorine the traditional way with liquid or tablets or you have a chlorine generator creating chlorine through electrolysis your pool is salted!  Pools with chlorine generators typically will have a higher concentration of salt (3000-4000 ppm) but in saying that, it is not uncommon for a standard pool to have a salinity close to that required to operate a chlorine generator as the daily additions of chlorine will tend to slowly raise the salinity until spillage and backwashing requires adding water back into the pool.

A sacrificial zinc anode (variety of models) installed inline within the pools circulation system and attached to the bonding loop being the least noble (weaker) metal will sacrifice itself and deteriorate away protecting the other vital bonded metal components of the pool.  So the question is, does your swimming pool have a sacrificial zinc anode? It wouldn’t hurt to have a little piece of mind and given that Sacrificial anodes are fairly inexpensive, so why not?