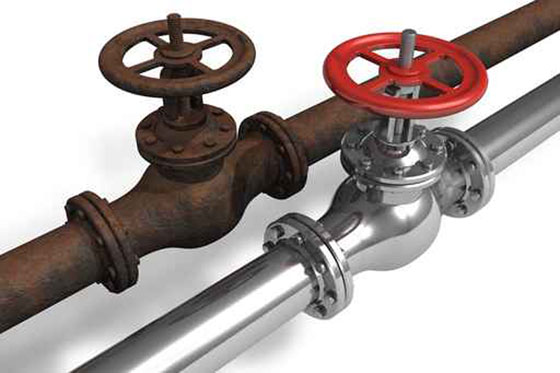 Recently I came across -again- the age-old misconception of salt water pools being overly corrosive and bad for equipment. I usually start making my points calm and composed but that doesn’t last long. Especially now, in the era of “alternative facts” this is becoming increasingly hard.  A simple Google search for the Word “Corrosion” will get this angry rant started…

Corrosion is: “a natural process, which converts a refined metal to a more chemically-stable form, such as its oxide, hydroxide, or sulfide. It is the gradual destruction of materials (usually metals) by chemical and/or electrochemical reaction with their environment.”

In the most common use of the word, this means electrochemical oxidation of metal in reaction with an oxidant such as oxygen or sulfur. Rusting (the formation of iron oxides) is a well-known example of electrochemical corrosion. This type of damage typically produces oxide(s) or salt(s) of the original metal, and results in a distinctive orange coloration. Corrosion can also occur in materials other than metals, such as ceramics or polymers, although in this context, the term “degradation” is more common. Corrosion degrades the useful properties of materials and structures including strength, appearance and permeability to liquids and gases.

Many structural alloys corrode merely from exposure to moisture in air, but the process can be strongly affected by exposure to certain substances. Corrosion can be concentrated locally to form a pit or crack, or it can extend across a wide area, more or less uniformly corroding the surface. Because corrosion is a diffusion-controlled process, it occurs on exposed surfaces. As a result, methods to reduce the activity of the exposed surface, such as passivation and chromate conversion, can increase a material’s corrosion resistance. However, some corrosion mechanisms are less visible and less predictable.”

So let’s start picking up on some of the points made here.

“Corrosion” can be chemical or electrochemical. Electrochemical being the process also known as Galvanic Corrosion.

As per Wikipedia Galvanic Corrosion occurs: “when two different metals have physical or electrical contact with each other and are immersed in a common electrolyte, or when the same metal is exposed to electrolyte with different concentrations. In a galvanic couple, the more active metal (the anode) corrodes at an accelerated rate and the more noble metal (the cathode) corrodes at a slower rate. When immersed separately, each metal corrodes at its own rate. What type of metal(s) to use is readily determined by following the galvanic series. For example, zinc is often used as a sacrificial anode for steel structures. Galvanic corrosion is of major interest to the marine industry and also anywhere water (containing salts) contacts pipes or metal structures.”

Let’s note that the process calls for different metals to be immersed in a common electrolyte. And that where naysayers give salt a bad rep. Yes, salt diluted in water forms an electrolytic solution. But is salt the only “electrolyte” in the pool?

Continuing with Wikipedia, an electrolyte is: “a substance that produces an electrically conducting solution when dissolved in a polar solvent, such as water. The dissolved electrolyte separates into cations and anions, which disperse uniformly through the solvent. Electrically, such a solution is neutral. If an electric potential is applied to such a solution, the cations of the solution are drawn to the electrode that has an abundance of electrons, while the anions are drawn to the electrode that has a deficit of electrons. The movement of anions and cations in opposite directions within the solution amounts to a current. This includes most soluble salts, acids, and bases. Some gases, such as hydrogen chloride, under conditions of high temperature or low pressure can also function as electrolytes. Electrolyte solutions can also result from the dissolution of some biological (e.g., DNA, polypeptides) and synthetic polymers (e.g., polystyrene sulfonate), termed “polyelectrolytes”, which contain charged functional groups. A substance that dissociates into ions in solution acquires the capacity to conduct electricity. Sodium, potassium, chloride, calcium, magnesium, and phosphate are examples of electrolytes, informally known as “lytes”.”

Well, look at that. “This includes most soluble salts, acids, and bases. Some gases, such as hydrogen chloride, under conditions of high temperature or low pressure can also function as electrolytes.”

Most soluble salts, acids and bases. Even chlorine? Degrading organic material too? Like Phosphates? Guess what, if you have a pool you have all those in the water regardless of using salt or not.
Galvanic Corrosion is a natural process that occurs when metals and water come together in any way shape or form.

Non-Galvanic Corrosion naturally occurs on all metals exposed to air due to the presence of air moisture. So unless you have a pool right smack in the middle of the Sahara desert your metals are corroding just because there’s oxygen in the air and some moisture.

Have you ever been in a pump room where every piece of metal has corroded? I bet you have. Guess what? It’s not the salt. Chlorine fumes, acid fumes and the oxygen you breathe did that.

Oxidizers are abundantly available all around us. They do go about their natural process, regardless of how we feel about it.

Oxygen and Chlorine are the most abundant oxidizers. Try running a pool without either one.

So, my message to all the “smarty pants” out there trying to make a living bad mouthing saline pools is plain and simple.

“Try the non-fiction section every now and then”